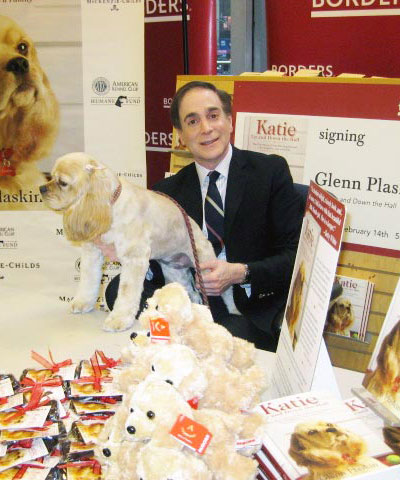 Bestselling author Glenn Plaskin specializes in writing non-fiction books– memoir, business, self-help, leadership, and inspiration. He has collaborated with public speakers, CEO’s, adventurers, and celebrities– anyone with a unique story to tell.

A native of Buffalo, N.Y. Plaskin was first trained as a classical pianist, studying under the renowned Kennedy Center honoree Leon Fleisher. With a dramatic change of career in his mid-20’s, he began writing culture profiles for the New York Times, securing his first book contract at age 26.

He was encouraged in his writing by then-Doubleday editor Jacqueline Onassis, who would later write: “I’ve known Glenn for some years and am his great admirer. He’s witty, articulate, and has this uncanny ability to draw people out and gain their confidence.”

His literary debut was a cause célèbre- the first-ever biography of the legendary pianist Vladimir Horowitz- published in the U.S., Canada, England, France, Germany, Japan, and Finland.

Plaskin’s Horowitz book was hailed by the New York Times as “a well-researched biography that will throw much light on Horowitz the man and the artist.” The Los Angeles Times opined: “It is done well, even masterfully.” The Chicago Tribune: “An absorbing well-written and well-balanced portrait… as delicious as a good detective thriller.”

Thereafter, the author established himself as one of the nation’s leading celebrity interviewers. As the Celebrity Service International wrote: “When it comes to the brutally competitive world of celebrity journalism, no one is more successful at nailing down the big names than entertainment reporter Glenn Plaskin.”

In recent years, Plaskin has gone beyond celebrity interviewing to writing articles and books focused on service, self-help, and inspiration. He has worked with many of the leading figures in this genre.

Visit the author’s website and read the full story at www.glennplaskin.com and www.katiebook.com